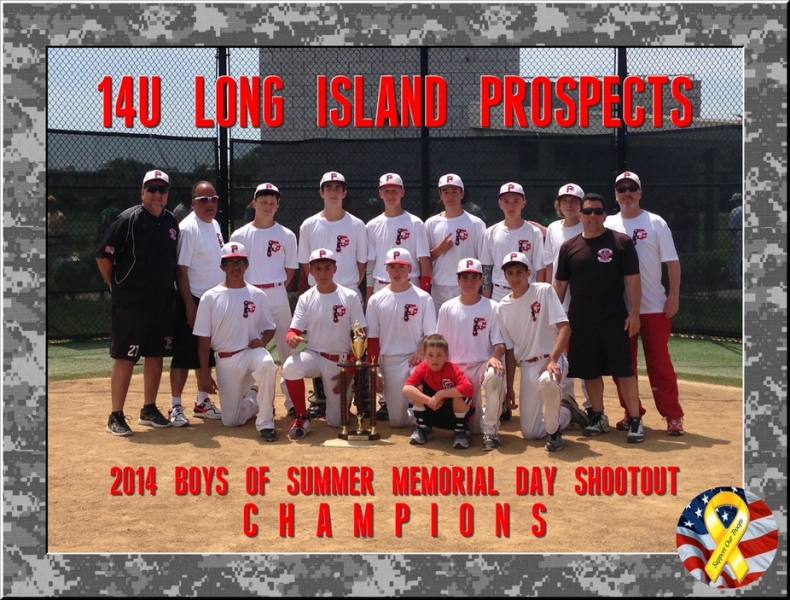 Prospects Catch a Wave in Game 1, Wipeout in Game 2

Farmingdale, NY – The 14U LI Prospects split a double-header on Sunday at Saltzman Memorial School in Farmingdale taking the opener, 9-3, and dropping the second, 8-4. Despite much sloppy play, the Prospects accomplished their goal of getting work for most of the pitching staff for the upcoming Boys of Summer Memorial Day Shootout tournament and hope to have left the miscues behind them.

Game one was a see-saw battle until the ‘Spects started to break away in the fifth inning. After early RBI hits by Tyler Manger and Chris Wasson, they trailed 3-2. The Prospects’ fifth started with consecutive base hits by Manger, Jack Delaney and a RBI single to left by Chris Behan to get it tied. After Nick Valeriano successfully sacrificed, moving Delaney and Behan up 90 feet, a ground ball from Billy McAdam to the Farmingdale secondbaseman was misplayed into two more runs for the Prospects and a 5-3 lead. Alec Acri led off the sixth with a hit-by-pitch and Delaney later dropped a single behind second base to drive him in. The Prospects tacked on in the 7th when Valeriano reached on an infield hit followed by a walk to McAdam. When they advanced on a wild pitch, Matt Conry delivered a 2-RBI single. After a stolen base and a balk got him to third base, Conry scored on a wild pitch.

In game two, the Greenwave got out to an early lead from which they would never look back. With Prospects starting pitcher Alex Rodriguez struggling to stay ahead of hitters, Farmingdale capitalized on free passes, shaky defense and timely hitting to score a pair in each of the first three innings. The Prospects scored in their half of the second on a lead-off single by Wasson and a RBI-double to deep center field by Manger. After reliever Behan got two quick outs in the Greenwave fourth, a single, hit batsman, a walk and a throwing error in the infield led to two more Farmingdale runs. With two outs in the bottom of the fourth, Manger dropped a bomb to left for a solo home run, chipping at the Greenwave lead, 8-2. After Conry came on to relieve in the fifth and quieted the Farmingdale offense, the ’Spects threatened in the seventh when a lead-off single by Manger, a couple of errors, a walk, and a single by Rodriguez plated two for the Prospects, but it was too little, too late.

It was a huge offensive day for the Prospects’ Tyler Manger going 5-for-6, with a 2B, a HR and 3 RBI.

Seaford – The 14U Long Island Prospects beat the Franklin Square Colts under the lights at Seaman’s Neck Park last night, 14-2, in a 9-inning game that counts as two games in the standings, and only went to the 7th frame due to run-rule. The Prospects were the benficiaries of 12 walks and 4 errors to go along with 6 hits.

Prospects starting pitcher Tyler Manger was very effective allowing just 2 hits and 1 earned run in his 6 innings of work. The defense was shaky at times but did enough to limit damage while the offense took advantage of the breaks they were given.

The ’Spects got the scoring started in the second inning when Alex Rodriguez got things going with a hard hit ball that was too hot to handle by the Colts second baseman. Three walks and an error led to a 3-0 lead.

Chris Wasson led off the 4th inning with an infield hit. Another error and two more walks brought a run in and loaded the bases. When a ball into right center field off the bat of Matt Conry was misplayed into a double, Franklin Square threw the ball around, Conry scored clearing the bases, and the Prospects led 8-0.

The Colts got on the board in the home 4th converting a couple of singles into a run.

A hit-by-pitch to lead off the bottom of the 6th and an error led to another Franklin Square run, 8-2.

The horseshoes flew off for the Colts in the Prospects’ 7th when four walks and a hit-by-pitch were followed by a 3-RBI double by Nick Valeriano, and a base hit by Manger to drive in Valeriano with the sixth run of the inning.

The 14U ’Spects remain undefeated playing up in the 15U NJBL Spring American league.

Farmingdale, NY – The LI Prospects used a brigade of pitchers and strong second-half offense to defeat the Farmingdale Greendogs convincingly, 12-3, in the NJBL 15U Spring American league. It was another 9-inning game that counts as two in the standings.

After the Prospects opened the scoring in the first inning with Brian Donnelly knocking in Nick Valeriano who singled to start the game, starting pitcher Valeriano showed good command on the hill for the ’Spects allowing no walks and an unearned run in three innings of work. The Greendogs went ahead with Matt Conry pitching in the fourth when two infield hits and two stolen bases led to a run and 2-1 lead for Farmingdale. The Prospects responded in the fifth with two runs on two walks and infield hits from Valeriano and Jack Delaney to retake the lead, 3-2. A lead-off single and stolen base by Alec Acri to start the sixth was followed by a ground out to second by Billy McAdam and a successful squeeze bunt by Chris Wasson, extending the Prospects lead to 4-2. As Wasson and Chris Behan pitched hitless and scoreless innings in the sixth and seventh, the ’Spects offense tacked on when a hit-by-pitch and a walk was followed by Conry burning the center fielder for a 2-RBI triple. A Donnelly sac fly plated Conry pushing the score to 7-2. After the Prospects went quietly in the top of the eighth, Acri came on to pitch a scoreless home half. ’Spects bats stayed hot in the ninth when Tyler Manger got things started with a double to deep center field. A walk to Behan and a bunt single by Valeriano loaded the bases. Delaney dropped a 2-RBI single into right field, Conry and Donnelly provided sac flies, and Acri singled in Delaney for a five-run inning and a 12-2 lead. Alex Rodriguez struggled to find his command in closing out the ninth when a walk and a couple of hit-by-pitch led to a Greendogs run but he worked out of the jam with no further damage.

Garden City, NY – The 14U LI Prospects got off to a pretty good start for 2014 with a 14-8 win over the Garden City Athletics in NJBL Spring 15U American league play. The 9-inning game counts as two in the standings.

With limited pitching available due to many players using pitch-count during the week with their school teams, the Prospects put together a patchwork of five pitchers over nine innings who limited the A’s to just 4 hits. The ’Spects bats, on the other hand, got hot early and produced 15 knocks on the day including 5 doubles.

After jumping out to a 5-0 lead after the 1st inning, the Prospects gave one back in the 2nd and led 5-1. The A’s charged back in the 3rd when 4 hits, a couple of walks and some sketchy defense led to 7 runs for Garden City to put them ahead 8-5. But the ‘Spects tightened it up, not allowing an A’s hit the rest of the way, and scoring 3 in the 5th to tie it, 4 in the 8th, and 2 in the 9th.